Analysts at US domiciled reinsurance broker Holborn Corporation have estimated that a major derecho event that impacted the state of Iowa in August could drive $5 billion of insured property losses. 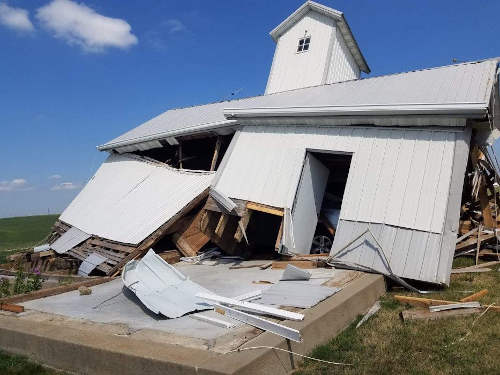 A derecho is a widespread, long-lived, straight-line wind storm that is associated with a fast-moving group of severe thunderstorms, and which can potentially be as powerful as hurricane or tornado force winds.

On August 10th, a derecho with maximum measured gusts of 126mph tracked across Iowa after initially developing in northern Nebraska and southeast South Dakota.

Three fatalies were reported and more than 8,000 homes are thought to have been destroyed or heavily damaged, as well as significant damage to crops and forestry.

In early September, Property Claims Service (PCS) estimated the insured losses of $2.9 billion for both the derecho and other severe storm activity in the region beginning on August 8th.

But Holborn, which currently represents approximately 25% of the property insurance market in the state of Iowa, says losses will be substantially higher than this figure.

“While little has been mentioned in the national media about this event, it has been a substantial one both in the region and across the country,” Holborn noted.

“In Iowa alone, the derecho is estimated to be at well over 4.5 times higher than the largest event in recent history, even after adjusting for population changes and claims inflation.”

“Across all of the Midwest, the Derecho, which largely impacted Iowa, is looking to be the 4th largest event in recent history. If we exclude any adjustment for claims inflation or population change, it be-comes the 3rd largest after the super-storms of 2011.”

Analysts further stated that catastrophe models will likely have to be recalibrated after this event, given that a derecho of this magnitude would only occur once in more than 1,000 years, based on current models.

Generali Global Corporate & Commercial (GC&C), a subsidiary of the Italian insurance giant, has announced the appointment of Alan Moore...