The impact of hurricane Barry combined with a series of severe thunderstorms in the U.S., monsoonal flooding across parts of Asia, and a record-breaking heatwave in parts of Europe contributed to billions of dollars of insured losses in the month of July, according to re/insurance broker Aon. 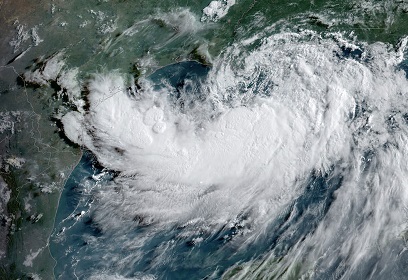 Hurricane Barry made landfall 160 miles west of New Orleans on Saturday July 13th as a Category 1 hurricane, but only reached maximum sustained winds of 75mph for a few hours, before dropping back into tropical storm territory.

The storm resulted in a new state record for the highest hurricane-induced rainfall of 16.59 inches in Arkansas.

Total economic losses from the storm are expected to exceed $600 million, with insurers paying out roughly 50% of this.

A series of severe thunderstorms across the U.S. in July 2019 resulted in a significant amount of hail and damaging wind impacts. A number of the outbreaks were a direct result of record heat that covered much of the U.S. Economic losses from the outbreaks of severe thunderstorms is expected to approach $2 billion, with much of the cost expected to be assumed by the re/insurance sector.

In Southeast Asia, monsoonal flooding claimed the lives of hundreds of people in July and drove a notable economic loss with an estimated 600,000 homes flooded in Bangladesh. Economic losses from the monsoonal flooding, which mostly hit the states of Assam, Bihar, Maharashtra and Uttar, is expected to reach well into millions of US dollars, driven by significant costs to agriculture and infrastructure.

In Europe, a number of countries were hit by a record-breaking heatwave, on the back of record heat in June. Germany, Netherlands, Belgium, Luxembourg, and the UK recorded all-time national highs.

This, combined with low levels of rainfall in certain regions, resulted in notable health impacts and likely affected multiple economic sectors, says Aon in its report.

Meteorologist and Head of Catastrophe Insight within Aon’s Impact Forecasting team, Steve Bowen, said: “The summer of 2019 has thus far highlighted several meteorological and climatological hazards across the Northern Hemisphere and further exposed humanitarian vulnerabilities. Parts of Europe and the Arctic have endured record-breaking heat which has resulted in an accelerated seasonal decline of polar sea ice, exacerbated wildfires, and enhanced drought conditions.

“At the same time, seasonal flooding across Asia has affected millions of people. As we continue to face further population and exposure growth in regions which are among the most at-risk as climate conditions evolve, the issue of resilience becomes even more pronounced.”

Other notable catastrophe events in the month of July include two of the strongest earthquakes to hit Southern California since 1999, a magnitude 6.4 foreshock and a magnitude 7.1 mainshock. A magnitude 5.7 quake also struck Iran in July.

Elsewhere, and a notable outbreak of severe weather hit France, Germany, Italy, the Czech Republic, Poland, Romania and Austria in early July, with much of the damage coming from large hail and severe winds. Large hail also hit parts of Spain in the month, while a combination of large hail, string winds and urban flooding impacted Slovenia and Croatia.

Both David Michelson and David Patterson have been selected as candidates to serve as Independent Directors on the Board of...