The Council of Insurance Agents & Brokers (CIAB) has reported that premium pricing increased across all-sized commercial property and casualty (P&C) accounts in the second quarter of 2019.

Similarly, all lines of business saw slight to moderate pricing increases during the quarter, with the exception of workers’ compensation.

Commercial property and commercial auto lines were hit the hardest in Q2, CIAB noted, and experienced particularly high increases of 8.5% and 8.4%, respectively.

In terms of size, medium-sized accounts increased the most in comparison to large and small accounts, at 6.2%, nearly double its Q1 increase of 3.5%.

“This marked the seventh consecutive quarter of increased premium pricing,” said Ken A. Crerar, President/CEO of The Council.

“Additionally, the rate of increase has grown consistently quarter-over-quarter, confirming the growing consensus of market-wide firming,” he explained.

“While this trend was specific to a number of lines in late 2017, including Commercial Auto, Commercial Property and Umbrella, every line The Council monitors, with the exception of Workers’ Compensation, experienced an increase in premium pricing in Q2 2019.” 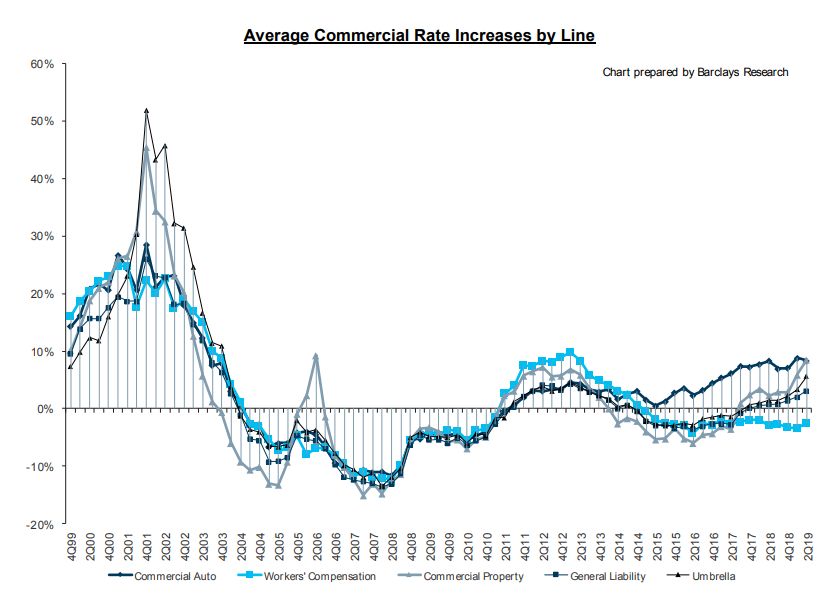 Likewise, claims results did not deviate noticeably from Q1 numbers, with the exception of cyber, for which 42% of respondents reported an increase in claims in Q2, following previous increases for 33% of respondents in Q1.

The CIAB report found that cyber was once again a top priority for respondents in Q2, with more than half ranking it as a top-three concern, and 74% reporting an increase in demand for cyber insurance.

However, ‘future premium increase’ was by far the greatest concern to clients, CIAB said, with 78% of respondents ranking it as a top-three concern, in line with the uptick in premiums recorded in Q2.