Munich Re tops list of world’s largest reinsurers by premiums

Germany’s Munich Re has reclaimed its place as the world’s largest reinsurance company when ranked by 2020 year-end gross reinsurance premiums written, following growth of 21.1% during the period. 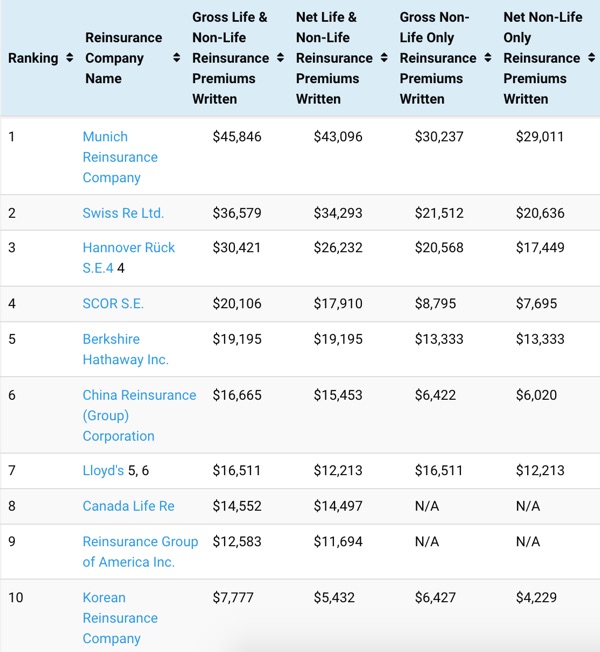 Based on research data from ratings agency A.M. Best, our directory of the Top 50 Global Reinsurance Groups shows that Munich Re took the number one spot from Swiss Re with life & non-life reinsurance GWP of $45.9 billion in 2020.

As well as some impressive growth over the year, Munich Re’s return to the top, which last occurred in 2017, is also a result of a methodological change adopted by A.M. Best to only include year-end reinsurance GWP, removing any primary premiums from the figures.

The ratings agency explains that this change, which stopped Swiss Re from claiming the number one spot for three years running, achieves greater precision in ranking.

For Munich Re, GWP of almost $46 billion occurred alongside net life & non-life reinsurance premiums of more than $43 billion, making it the only company in the list to exceed the $40 billion mark for either GWP or NWP.

As explained by A.M. Best, the methodological change makes it appear as though Swiss Re’s GWP has fallen year-on-year, but when you exclude primary premiums from the firm’s 2019 figures, its total GWP actually increased.

As in 2019, the remaining two large European reinsurers take third and fourth place on the list, with Berkshire Hathaway staying in fifth place.

One of the notable changes in the top 10 was China Re’s climb from seventh in 2019 to sixth on the list based on year-end 2020 figures, with GWP reaching $16.7 billion and NWP $15.5 billion. This growth saw China Re leapfrog Lloyd’s which dropped to seventh place, with GWP of $16.5 billion and NWP of $12.2 billion.

“As they did in 2019, the 10 largest reinsurers on the list accounted for over two thirds of the total GWP in 2020: 68.5%, very similar to the 68.6% they held in 2019,” explains the ratings agency, adding that the slight dip was likely driven by the exclusion of Swiss Re’s primary business.

Combined, the top 10 largest reinsurers’ GWP increased from $197.5 billion in 2019 to $220 billion in 2020, although the cohort’s share of premiums remained largely the same.

Of course, much of this premium growth is likely a result of companies taking advantage of rate increases and more favourable, hardening market conditions, a trend which many commentators and analysts, A.M. Best included, expects to persist into 2022.

“The static nature of the top 10’s market shares reflects their dominant relationships with brokers and cedents, along with their pricing power and their more insulated positions from competition. However, for cedents, this concentration means that diversifying their reinsurance panels and ameliorating counterparty risk remains a challenge,” says the ratings agency.

Outside of the top 10, new entrants to the list for 2020, which can be viewed here, include Fidelis and Lancashire, which sit in 41st and 43rd place on the list, respectively.

The biggest rise in ranking, year-on-year, can be seen with Qianhai Re, which moved up five places to 34th on the list. Arch Capital, Generali, and Caisse Centrale de Reassurance all moved up by four places in 2020, to 18th, 19th, and 26th on the list, respectively.

The biggest mover down the list in 2020 was Hiscox, which fell seven places to 47th on the list. While IRB and Qatar Re both dropped by six places to 31st and 49th, respectively. AXIS Capital moved down five places in 2020 to 24th on the list.

“COVID-19-related losses were significant for several companies, accompanied by continued social inflation in US casualty business and secondary peril natural catastrophe activity. For the four largest reinsurers alone, 2020 COVID-19 P/C reinsurance-related losses accounted for a range of approximately 5 to 15 percentage points in their combined ratios. With an anticipated return to normalcy after the pandemic, along with expected continued rate hardening, an improvement in combined ratios is expected for 2021, barring an above average wind season,” says A.M. Best.