Property Claim Services (PCS) has designated the recent Lürssen shipyard fire as an event under its PCS Global Marine & Energy product, triggering the process to monitor, aggregate and report on the insurance and reinsurance industry loss. 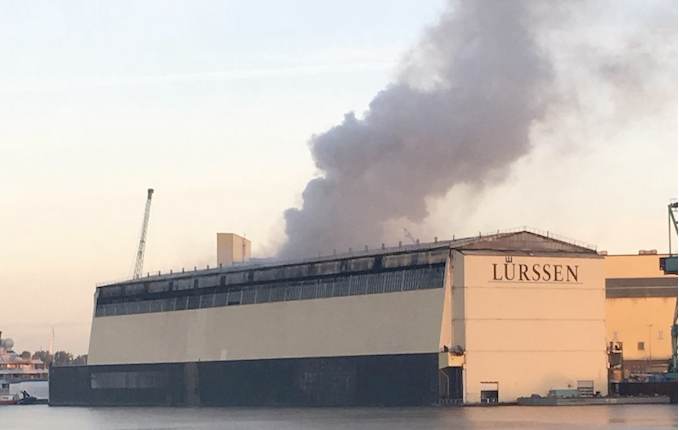 PCS launched its Global Marine and Energy loss aggregation solution in April 2017, which was the firms first specialty lines and non-property catastrophe product.

The fire that broke out on Friday, September 14th broke out at the Bremen, Germany shipyard of superyacht manufacturer Lürssen.

A floating dock and building shed caught fire, where a 100-meter plus superyacht was under construction at the time.

Lürssen stated, “In the early morning at approximately 02:00 a fire broke out in the floating dock of the Fr. Lürssen Shipyard in Bremen-Aumund and onboard the yacht within it. The emergency procedures commenced immediately, in the course of which the persons still working on board were evacuated and examined with respect to possible smoke intoxication and the firefighting department and emergency response teams were alarmed. Additionally, the whole premises were evacuated. Further buildings or other ships were not affected.”

The fire took hold inside the shed and the heat made fighting the blaze difficult for the authorities, resulting in significant damage.

Lürssen said that the dock itself had been stabilised, so the structure is unlikely to capsize, but it’s assumed that the damage to the yacht being constructed, the dock, shed, tools and machinery inside has been substantial and reports suggest the luxury yacht has been completely destroyed by the fire.

Now that this has been designated as an event under the PCS Global Marine and Energy product, the company will deliver updates to subscribers detailing the eventual market-wide insurance and reinsurance loss.

Marine hull lines are assumed as the market segment that will take the brunt, with some suggesting that almost $700 million of insurance policy is at risk from this event.

In fact it has been cited by TradeWinds as potentially the largest hull claim ever to hit the market, with Lloyd’s underwriters expected to shoulder a significant share.

A loss of this size could also hit retrocessional reinsurance markets, as was seen with other recent major man-made claims such as the Costa Concordia loss and Tianjin explosions.

The specialist Lloyd's of London insurance and reinsurance marketplace could lose access to both the Polish and German market for...