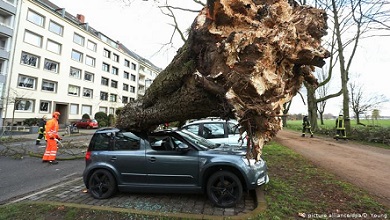 Dragi-Eberhard consisted of two low pressure systems that affected areas of the British Isles, and Western and Central Europe on 9 and 10 March 2019.

Given the storms affected similar regions across the British Isles, France, the Benelux States, Germany and Switzerland over the two days, PERILS decided that it was not possible to allocate specific insured losses to either named system.

PERILS also announced that Extratropical Cyclone Bennet, which affected mainly France, Germany and Switzerland on 4 March 2019, did not exceed its reporting threshold of €200 million and has therefore been categorised as a non-qualifying event.

The initial estimate of insured losses from Cyclone Dragi-Eberhard is based on loss data directly collected from affected insurers, and represents by far the largest loss event in an otherwise benign 2018/2019 European winter storm season.

For the majority of the individual affected countries, the event loss return period was however not unusual, with the exception of Belgium, where the loss level caused by Dragi-Eberhard is expected to be reached or exceeded once every 10 years.

In total, Dragi-Eberhard resulted in the deaths of three people, including two in Germany and one in Belgium.

The storm also affected the Czech Republic, Poland and Slovakia, but these countries were not covered by the PERILS loss survey.

PERILS will release an update estimate of the Dragi-Eberhard market loss three months after the event end date, on 10 June 2019.

A division of Liberty Mutual Insurance Group, Liberty Specialty Markets has announced the promotion of Emmanuel Silvestre to Deputy General...