Catastrophe insurance data provider PERILS has settled on a final industry loss estimate of AU $989 million (US $769 million) for the East Coast Low that hit Australia in February 2020. 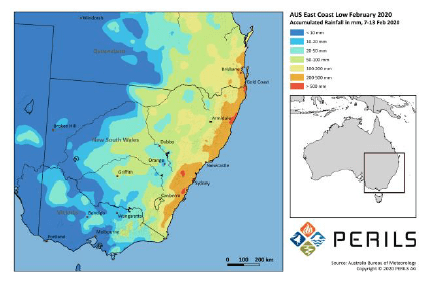 This fourth update, which comes a full 12 months on from the event, is slightly above the previous $954 million figure that PERILS put out in August 2020.

The loss number covers the property and motor hull lines of business.

The East Coast Low of February 2020 was a typical example of such an event and caused very intense rainfall, flash and river flooding and strong winds along the Australian east coast from early to mid-February 2020.

Property damage accounted for the vast majority of losses with 94% attributable to this line of business, while motor losses represented 6% of the total industry losses.

“During the current summer, Australia’s east coast has continued to experience considerable rainfall and storms due primarily to the influence of La Niña. This report is a reminder that in addition to bushfires, hailstorms and tropical cyclones, the east coast is also exposed to large-scale extratropical cyclone systems which can have a considerable impact on the insurance industry.”

EU regulator the European Commission has approved the acquisition of re/insurance broker Miller by global private equity firm, Cinven, and...