The German Insurance Association (GDV) has said that insurers and reinsurers are set to pay out €650 million (USD 727 million) as a result of a series of hail storms that hit the Munich area of Germany around the Pentecost holiday. 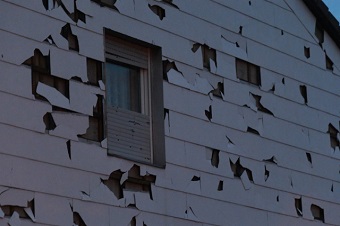 A house damaged by the hailstones in Germering, on the outskirts of Munich. Photo: DPA

Actuaries had previously estimated that one of the severe hail storms that hit the region of Bavaria could cause damages worth hundreds of millions of euros. Consultancy Meyerthole Siems Kohlruss (MSK) has estimated industry losses of between €400 million and €600 million (USD 445 million – USD 671 million) as a result of the storm.

Now, the GDV has said that a combination of storms that brought heavy rainfall and severe hail to the Munich area between June 3rd and June 12th, 2019, has resulted in almost 250,000 insured claims and insured losses of around €650 million.

Broken down, and the GDV reveals that the repair or replacement of some 125,000 insured vehicles had driven around €350 million (USD 392 million) of the loss total. The remaining €300 million (USD 336 million) insured loss is from roughly 120,000 claims related to damages to houses, household effects, as well as commercial and industrial enterprises.

According to Bernhard Gause, GDV’s Managing Director, around 75% of all vehicles are insured against natural hazards. However, more than one in two homes in Germany do not have protection against heavy rain and high water, suggesting that the insured loss is only part of the story.

Hail and convective storms in Germany appear to be on the rise in the summer months, increasing the need for robust risk management and reinsurance protection around property insurance business in the country.