Swiss Re moves above Munich Re as world’s largest reinsurer: AM Best

Global reinsurer Swiss Re has knocked Munich Re from its position as the world’s largest reinsurer, as measured by year-end gross premiums written (GPW) in 2018, according to AM Best data viewable at our Top 50 Global Reinsurance Groups directory. 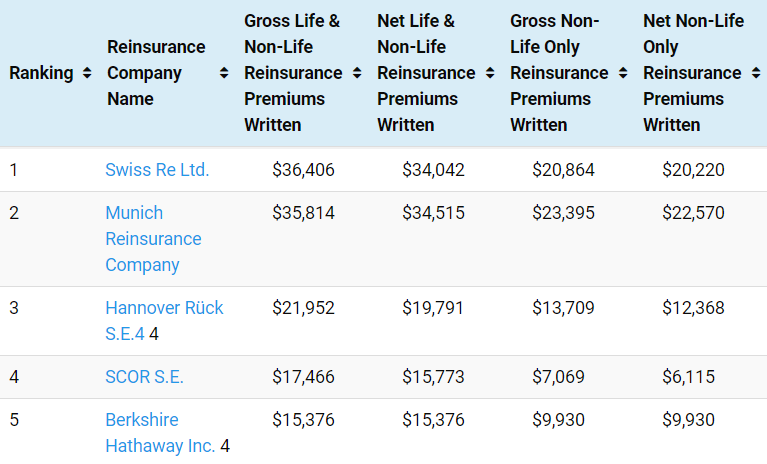 Munich Re’s total GPW declined by 5.3%, a drop that AM Best attributes to the termination of two large transactions, with measured growth in the remaining life business across all markets.

Despite the switch, AM Best states that both Swiss Re and Munich Re will likely continue competing for first place for the foreseeable future, as together they account for close to 30% of total GPW in the rankings.

Another notable shift in the rankings comes in the form of Warren Buffett’s global re/insurance company Berkshire Hathaway dropping two places to fifth, with Hannover Rück climbing to number three and SCOR to four.

Given the one-off nature of the deal, NICO’s GPW decreased by more than 30% in 2018, with the company falling back to fifth place.

Although Hannover Rück and SCOR both reported modest growth in 2018, AM Best says the latter experienced a mild top-line decline in this year’s Top 50 ranking, driven by the weakening of the euro against the US dollar.

The most significant drop in ranking was by Maiden Re, falling out of the top 50 from its 40th spot in 2017.

AM Best says the drop was driven by its a decision to divest all of its US treaty reinsurance operations, which no longer factor into its premium revenue.

Meanwhile the market share of the top 10 reinsurers has consistently been around 70% over the past several years.