Tremor, the programmatic insurance and reinsurance risk transfer marketplace, has seen an average of more than $70 million capacity offered and $30 million of protection requested each week on its industry loss warranty (ILW) market since it launched in April.

The online ILW auctions began on April 2 as part of an effort to ensure the market continues operating during the unfolding coronavirus pandemic.

So far, more than 10 markets have participated and more than 50 bids have been received, with reinsurance brokers playing an important role coordinating supply and demand.

According to Tremor, spreads have fluctuated each week, with the best buy and sell prices converging to produce a transaction for US wind and earthquake risk.

In recent weeks, spreads are narrowing while the traditional market is hardening and activity is expected to increase going into June and July.

“The Tremor team is thrilled with the early and consistent engagement of the industry with our new marketplace dedicated to ILW trading,” said Sean Bourgeois, Tremor’s Founder & CEO. “We have had more buyers and sellers than expected and much more volume than expected with new participants offering quotes every week – and we are still a few weeks out from midyear renewals.”

“Reinsurance brokers are playing an important role as well, advising their clients how to bid programmatically on Tremor. We believe that activity will increase even further after midyear renewals complete when the dust begins to settle on traditional placements,” he explained. 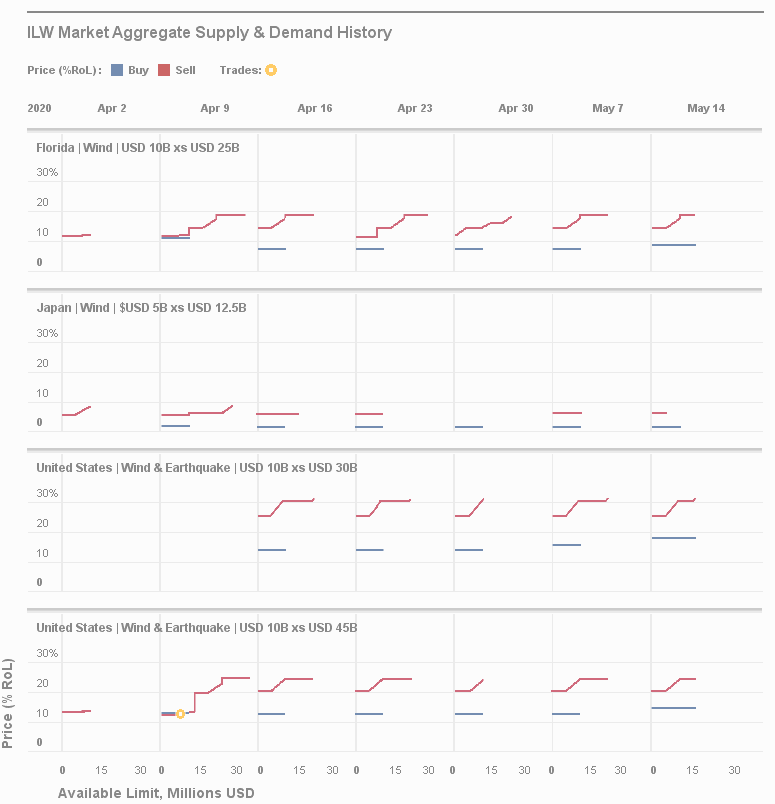 As can be seen in the graph above, Tremor has completed 7 auctions for each product. Spreads have begun to narrow on the majority of ILW products over the last two weeks, and Tremor expects this trend to continue and for more trade to clear as the market moves towards June 1 renewals.

“Spreads have started to narrow quickly which is a great sign, signaling that the market is getting more and more serious about trading ILWs more frequently while the UNL market continues to harden,” Bourgeois continued. “To promote further transparency, Tremor is pleased to release all of its aggregate market data, which is available to members of the Tremor marketplace.”

Tremor intends to continue to run ILW auctions each week on a common set of structures, releasing aggregate data to its members after each auction to enhance trading.

Bourgeois added: “We offer a unique, discreet and transparent way to buy or sell common ILW structures which we believe will be highly attractive to reinsurers, Lloyd’s syndicates, ILS funds and for certain insurance companies. We hope that our market will continue to grow to become a permanent feature of the retro market to enable dynamic ILW trading throughout the year.”