The Texas Windstorm Insurance Association (TWIA) has released the details of its full catastrophe reinsurance program for the 2022 hurricane season, which consists of a $2.036 billion program tower, including $936 million of traditional reinsurance and $1.1 billion of coverage from catastrophe bonds.

While the level of protection from its catastrophe bonds remains the same as in 2021, TWIA’s traditional reinsurance coverage has been increased significantly from $830 million last year.

And according to TWIA’s broker, Gallagher Re, the expanded coverage was secured for a higher price, with firm-order-terms (FOT) for the renewal pointing to a rate-on-line (ROL) of 6.75%.

TWIA reports that the reinsurance costs for its 2021-2022 program totaled $102.1 million of ceded earned premium.

In total, TWIA’s 2022 reinsurance program, effective June 1, 2022, to May 31, 2023, provides $4.236 billion in total aggregate funding, when accounting for the larger $183 million Catastrophe Reserve Trust Fund (CRTF) that sits at the bottom of its tower.

At this level, the coverage meets the statutory minimum funding requirements. 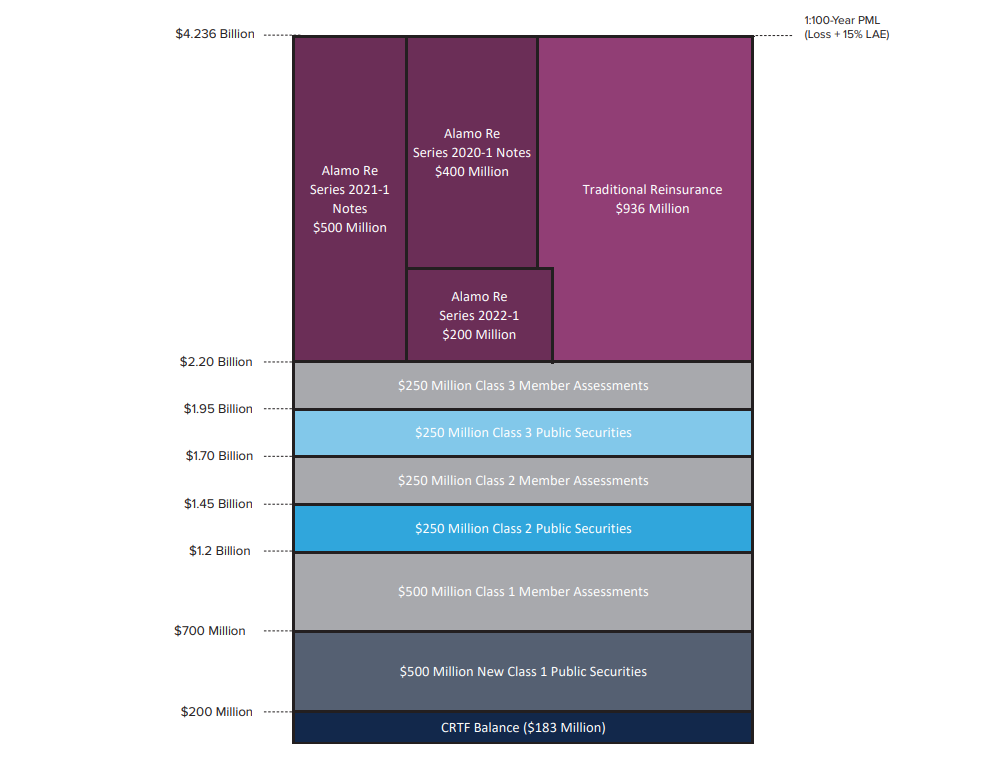 Details of all of TWIA’s catastrophe bonds to date, as well as every other catastrophe bond and ILS transaction since the market’s inception, can be viewed in the Artemis Deal Directory.

TWIA notes that its 2021 1-in-100 probable maximum loss (PML) and its resulting reinsurance purchase was reduced by more than $300 million following a recommendation from WTW that the Association use more detailed secondary modifier data in catastrophe modeling, with several additional data elements identified by the independent consulting firm.

TWIA is a residual insurer of last resort and is required by statute to function in a manner as to not be a direct competitor in the private market. Its primary purpose is to provide an adequate market for windstorm and hail insurance in certain designated portions of the seacoast territory of Texas.

The Association operates as an insurance company by issuing policies, collecting premiums, and paying losses, and is required by law to transfer its net gain from operations each year into the Catastrophe Reserve Trust Fund (CRTF), an account maintained by the Texas Comptroller dedicated to the payment of future TWIA catastrophe losses and other limited uses as provided by Texas Insurance Code.