When ranked by net premium written (NPW) in 2020, UnitedHealth Group Incorporated remains the world’s largest insurance company on the back of year-on-year growth of 6.21%. 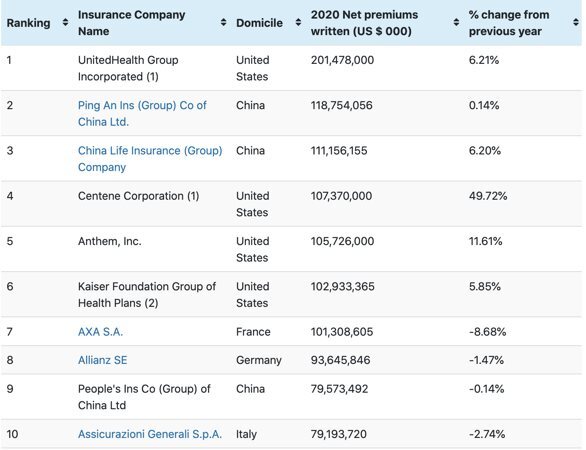 Based on research data from ratings agency AM Best, our directory of the World’s Largest Insurance Companies shows that UnitedHealth Group has maintained its leading position, with NPW of a huge USD 201.4 billion in 2020.

China’s Ping An Insurance remains in second place for the second year running, with 2020 NPW of approximately USD 118.7. Sitting in third place, and moving up one from last year is China Life Insurance Company, which reported NPW of USD 107.3 billion representing year-on-year growth of 6.20%.

In fourth place is Centene Corporation, who moved up from tenth with NPW of USD 107.3 billion.

Moving up one place is Anthem who sits fifth on the list, with NPW growth of 11.61% in 2020 to USD 105.7 billion. Switching places with Anthem is Kaiser Foundation Group of Health Plans who sits sixth on the list, and reported NPW of USD 102.9 billion, which translates to year-on-year growth of 5.85%.

Sitting in ninth place is another Chinese insurer, People’s Insurance Co of China, which has moved down one place with NPW of US 79.5 billion.

Completing the top ten is Generali with NPW of US 79.1. billion.

In terms of year-on-year NPW growth, the biggest mover is Centene Corporation, with the insurer reporting a massive growth of 49.72%. However, on the other end of the table, Health Care Service Corporation Group moved from last place (25th) to 19th, reporting NPW of USD 44.9 billion, representing year-on-year growth of 12.13%.

This World’s Largest Insurance Companies directory also ranks firms based on non-banking assets at year-end 2020. Once again, this list is based on research data from ratings agency AM Best, and shows that for the second consecutive year Allianz SE has taken the top spot with net non-banking assets of USD 1.2 trillion, which represents growth of 4.90% from 2019.

Ping An Insurance showcased the most year-on-year growth within those listed in the top ten, with 16.49%. Whereas in 22nd place Great-West Lifeco Inc. reported 33.10% year-on-year growth, representing non-banking assets of USD 469.8 billion.