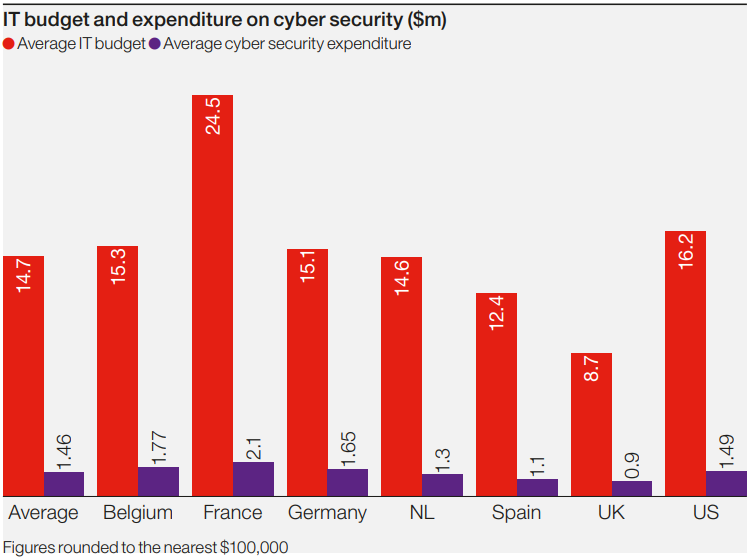 After adjusting for the increased size of the study group in this year’s report, the total spend represents a rise of just under 20% on the equivalent 2018 figure, with spending heavily weighted to the biggest firms.

Across the study group, there was a marked rise in overall spending on IT – up from an average $11.2 million last year to $14.7 million this year.

The report says this is largely explained by the first-time inclusion of France, where the average IT budget is $24.5 million.

The percentage of IT budgets spent on cyber is marginally lower than before – accounting for 9.9% of the total IT spend compared with 10.5% the previous year – but by value it is up nearly a quarter (24%), to $1.46 million.

The inclusion of Belgium and France this year also skewed the numbers to the high side. The average spend on cyber security by Belgian companies is $1.77 million and for French companies it is $2.1 million. Both figures are well above the average for the seven countries examined in the report.

UK organisations were shown to have the lowest cyber security budgets with less than $900,000 on average, compared with an average across the study group of $1.46 million.

Labuan IBFC remained the leading jurisdiction in Asia for captive formations in 2018, with six new formations over the year...