Property business is expected to drive much of the medium term underwriting improvement at global insurer American International Group Inc. (AIG), and the firm would be wise to make better use of the softening reinsurance market environment, suggests Credit Suisse analysts.

In light of recent executive appointments at the global insurance firm, Credit Suisse analysts have examined and commented on AIG’s new strategy and performance, both now and in the future.

Organic underwriting improvements in commercial P&C are expected to take some time, although property business is expected to provide the bulk of AIG’s medium term improvement, despite this area of the market experiencing the “most pricing headwinds,” driven by ample capacity from intense competition.

“Fortunately, we think profitability improvements to this business are achievable in a relatively short time frame provided that the company is willing to sacrifice some NPW in the medium term,” explains Credit Suisse.

Recent modularity disclosures reveal that both the profitability and capital efficiency of AIG’s Property and Special Risks business are “unacceptable,” says Credit Suisse, continuing to explain that AIG consumes $8.2 billion of capital while earning a 0% return on equity (ROE) on a run-rate basis, “given existing cat load and high 50s attritional loss ratios.”

However, Credit Suisse feels the firm should be able to alter the earnings course of this part of the business pretty quickly, via a combination of re-underwriting and utilising the soft reinsurance marketplace, something Credit Suisse says AIG has failed to take advantage of over the last few years.

While challenging for reinsurers, the softening reinsurance landscape has been beneficial for buyers of protection, with many insurers reporting increased coverage at renewals under more favourable terms, and at a reduced cost.

During the softening reinsurance market cycle, which can also be described as a buyers market, cedents are able to take advantage of favourable conditions to improve capital efficiency, something AIG has failed to do so when compared to some if its peers, and that Credit Suisse encourages the firm to utilise.

Credit Suisse notes that previous figures at Lloyd’s shows that primary property ran at 73% net/gross, ceding $2 billion of $8 billion gross premium, while XL reported that in Q1 2017 net/gross for primary property business was 48%, compared with 61% a year earlier, while the gross premiums actually grew by 10%. This suggests that XL took advantage of the availability of efficient reinsurance capital during Q1 and lowered its retention, transferring more risk to the global reinsurance market.

But according to Credit Suisse analysis, the same can’t be said for AIG, with analysis estimating the firm ceded little over $1 billion of its entire U.S. P&C business in 2016, excluding a $1.2 billion quota share with reinsurer Swiss Re.

In fact, and as shown by the chart below, the volume of premium AIG has ceded to the global reinsurance market has declined by approximately $1 billion over the last ten years, leading Credit Suisse to say it thinks “AIG could use more reinsurance to become more capital efficient.” 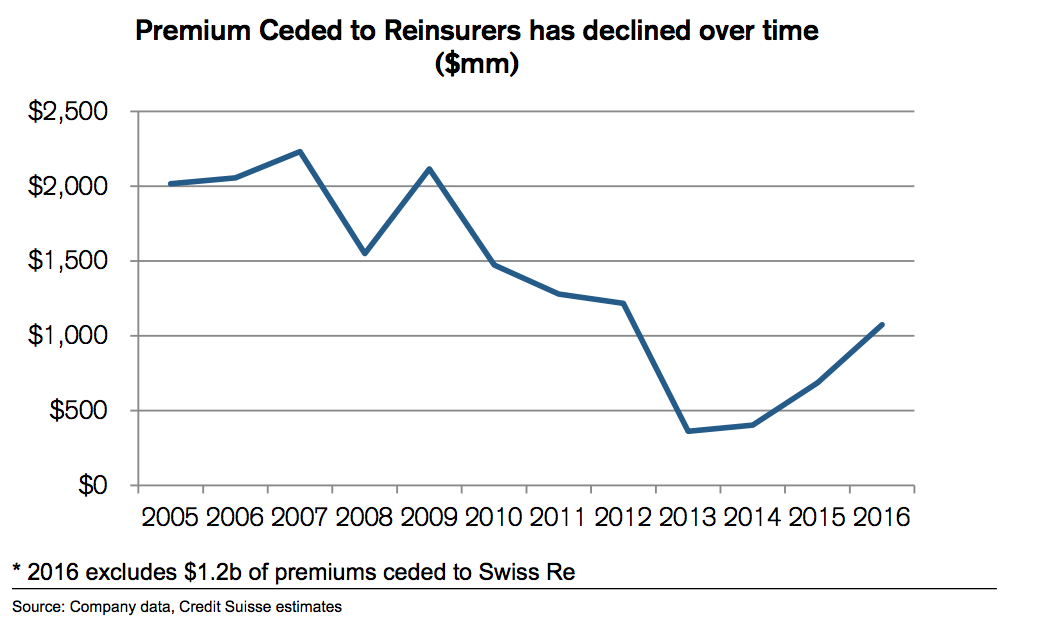 Absent a truly market changing event, or a series of large events, the softening reinsurance market cycle shows little sign of turning. Ample capacity from both traditional and alternative sources continues to drive intense competition, and combined with low-interest rates and the benign loss experience the buyers market is likely to persist for the remainder of 2017 and into 2018.

With this in mind, AIG could utilise the softening reinsurance market to improve its capital efficiency, making the most of more favourable terms and conditions and lower costs while the market permits. Because after all, the market will turn at some point and the when that happens, primary players might find reinsurance capital less efficient than it is today.