In early May, Allstate provided an update on its reinsurance arrangements for the months ahead, including the notable expansion of its per-occurrence Nationwide tower to provide coverage up to $6.614 billion of losses excess a $500 million retention.

At this year’s renewal, Allstate secured traditional reinsurance market coverage of $1.3 billion for its Florida program. The first to attach is a $126.9 million below FHCF layer excess a $40 million retention, which is 71.1% placed and has two reinstatements of limits. Sitting next to this is the riskier Class C tranche of Sanders Re III notes, which provide $37.5 million of limit excess a minimum $169.6 retention.

As well as the three main excess layers and two ILS market transactions, this year’s program also includes a multi-year excess layer which provides $264.1 million of coverage excess a $169.6 million retention. This slice of protection sites alongside the 2022-2 Class B excess cat reinsurance contract, and also a new gap fill layer that provides $50 million of protection excess a $169.6 million retention. 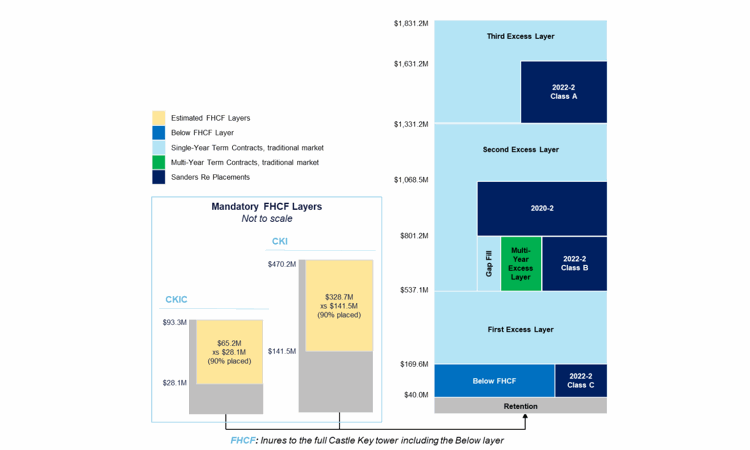 In comparison, the 2021-2022 Florida reinsurance program also had a $40 million retention under the below FHCF layer, with coverage extending up to a total $1.239 billion, comprised of traditional reinsurance protection of $939.1 million, and $200 million of coverage via the 2020-2 Sanders Re II cat bond.

Also this year, mandatory FHCF coverage is larger than in 2021, in-line with the growth of the tower and Allstate has continued to opt for 90% participation.

So, Allstate’s Florida reinsurance tower has grown by almost $600 million, year-on-year, with almost 50% of the growth coming from its $287.5 million Sanders Re III 2022-2 catastrophe bond transaction, which is split across three layers of the program. The remaining roughly $300 million of growth is from the traditional reinsurance market.