Dedicated, global reinsurance capital declined by 2% in the first nine months of 2018 to $595 billion, driven by a decline in traditional capital by $20 billion, according to insurance and reinsurance broker Aon.

The 2% overall decline to $595 billion at the end of September, 2018, is from the end of 2017. Aon notes that despite the significant catastrophe losses experienced over the last two years, which amounts to an industry loss of roughly $230 billion, global reinsurer capital remained resilient in the period.

Aon notes that despite the high losses, the proportion assumed by reinsurers has been fairly low, at perhaps no more than 25%. The broker says that this is a result of the profile of the underlying events as well as the higher retentions carried by larger primary insurance companies.

The decline was driven by the traditional market, which experienced a capital decline of 4%, or $20 billion, to $496 billion. At the same time, the volume of alternative reinsurance capital increased in the nine month period to $99 billion, which is growth of 11%.

The below chart, provided by Aon, shows the volume of traditional, alternative, and overall reinsurance capital since 2006. 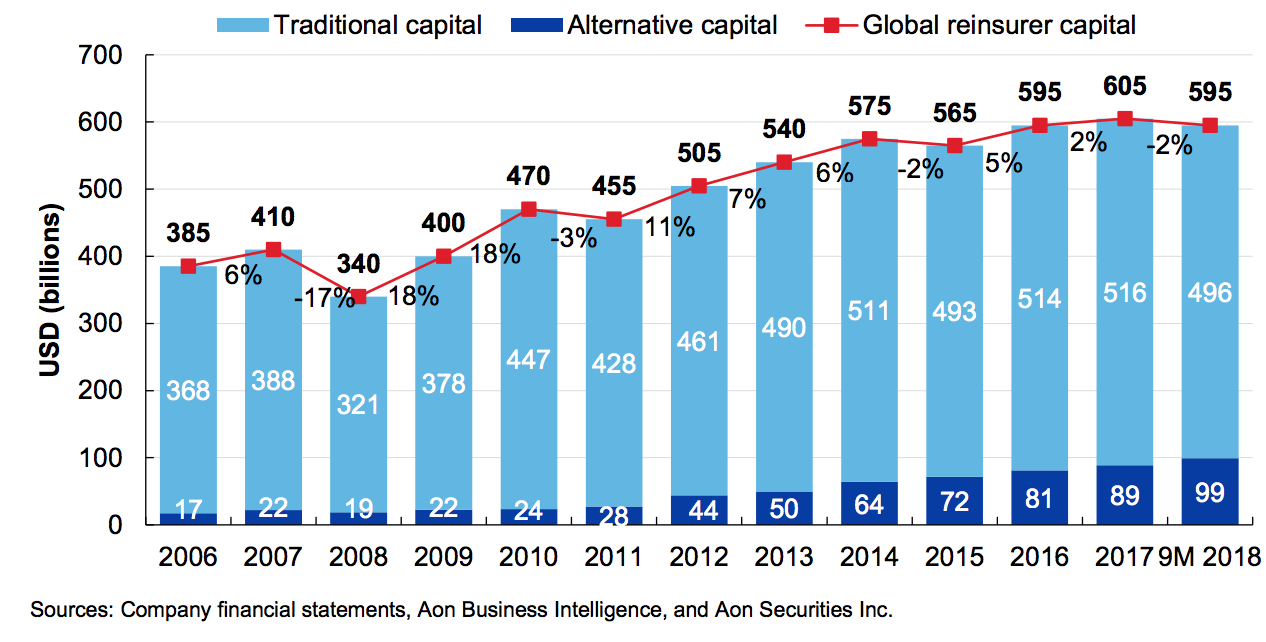 Discussing traditional capital, Aon states that just 16 of the 21 constituents of Aon’s Reinsurance Aggregate reported results for the nine month period. The reported results show that total equity fell by 5% to $167 billion, which is in part due to the strengthening of the U.S. dollar.

At the same time, the group experienced strong premium growth in the period, which Aon says is partly influenced by past merger and acquisition (M&A) activity. Reinsurance premiums actually increased in the period, with a number of companies experiencing heightened demand.

The net combined ratio for the group stood at 96.7%, which is an improvement on the 111.3% reported for the same period in 2017. Net income totalled $10.4 billion for the group, which represents an annualised return on equity of 7.8%.

Regarding alternative capital, Aon states that headline growth in the space is slowing as a result of recent cat events and subsequent losses. However, once the alternative market has fully digested the losses of the last two years, Aon expects the previous growth to continue.

Rates continue to increase across commercial lines at Q4: IVANS

Premium renewal rates during the fourth quarter of 2018 continued to increase across almost all commercial lines, according to the...