Harvey to be one of costliest disasters to hit the U.S. on record: Aon Benfield

Reinsurance broker Aon Benfield’s catastrophe risk modelling unit, Impact Forecasting, has said that hurricane Harvey is most likely to be one of the costliest natural catastrophe events on record in the U.S. 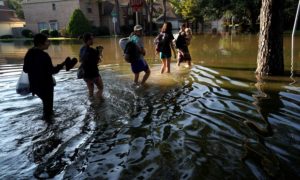 Photo from the Guardian

As part of the unit’s latest catastrophe recap report, which looks at the month of August, 2017, hurricane Harvey is highlighted as one of the costliest events on record in the U.S.

“Hurricane Harvey’s landfall in the United States officially put an end to the 11-year major hurricane drought. The impacts from the cyclone were far-reaching, and the scope of flood damage in Houston – the nation’s fourth largest city – was historic. Given the anticipated costs from direct damage and business interruption, it is expected that Harvey will eventually be recorded as one of the costliest natural disasters on record in the U.S.

“Harvey served as a challenging reminder of how catastrophic hurricane events can be, and with September being the peak of the Atlantic Hurricane Season, the risk of further storms remains high,” explained Steve Bowen, Impact Forecasting Director and meteorologist.

Harvey devastated parts of Texas with record-levels of rainfall and subsequent widespread, extreme flooding, with parts of Louisiana also being hit the storm.

Overall, economic losses are projected to be at least in the tens of billions of dollars, which Aon Benfield says would make Harvey one of the costliest natural catastrophe events in the U.S., on record.

Insured losses from Harvey are estimated to be a minority of the overall loss, owing to much of the expected loss coming from flooding, an area that lacks insurance penetration in Texas.

AI could “fundamentally close a lot of the protection gap,” Swiss Re CEO Mumenthaler