Australian primary insurer Insurance Australia Group Limited (IAG) has successfully renewed its catastrophe reinsurance protection at an expanded size of $9 billion, up from $8 billion in the prior year.

The 12.5% increases in catastrophe reinsurance limit has been secured in a similar structure to 2018, to provide IAG with gross reinsurance protection amounting to $9 billion across the calendar year ahead.

67.5% of the program has been placed, to account for the cumulative quota-share reinsurance (20% from the whole account quota-share with Berkshire Hathaway, 12.5% from the 2018 arrangement with Munich Re, Swiss Re and Hannover Re) that covers the other 32.5% of the cat exposure for IAG.

In addition, IAG has its sideways aggregate reinsurance protection as well, which will help to lower the cost of a second catastrophe event to $175 million ($118 million after the quota share) and any subsequent event to $25 million ($17 million post-quota share).

IAG has increased the size of its catastrophe reinsurance program to $9 billion to increase its cover above modelled exposure. The insurer expects that underlying aggregate exposure will show a modest increase in Australia and growth of approximately 5% in New Zealand in 2019.

More than 92% of the program was placed with reinsurers rated as A+ or higher, IAG said.

The insurer said that it experienced relatively flat reinsurance renewal rates, adding that the overall cost of the program was in line with its assumptions. 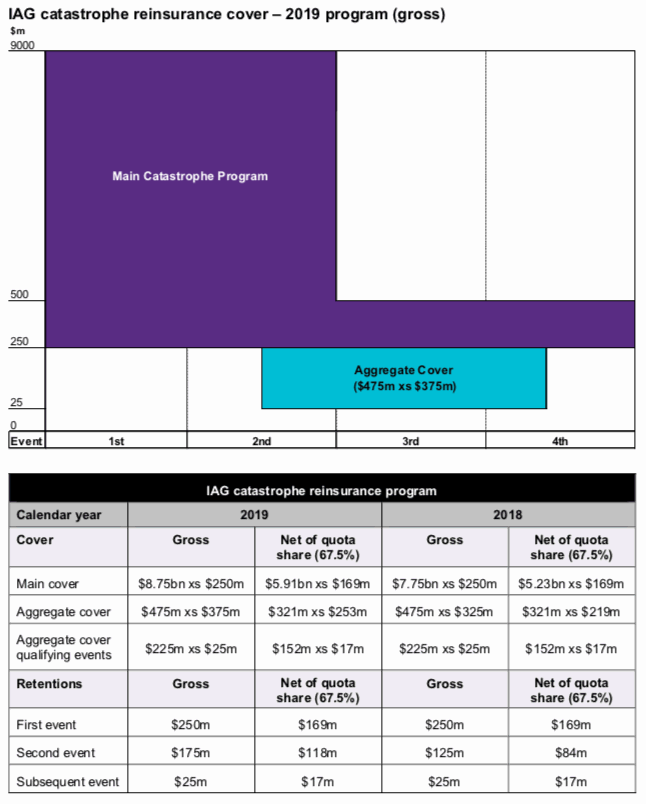 Following the introduction of new international requirements for companies to show economic substance in jurisdictions where they have a registered...