Munich Re is expecting to incur losses in the range of €100 million to €120 million as a result of the recent Ethiopian Airlines crash and subsequent grounding of Boeing’s 737 Max aircraft. 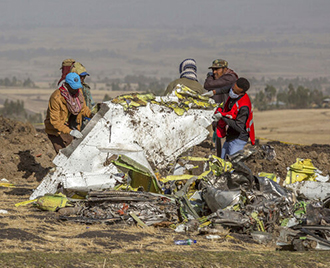 Speaking at a press conference this week, Munich Re’s CEO of Reinsurance, Torsten Jeworrek, said that the firm was anticipating claims from the loss of the Ethiopian Airlines plane itself, the loss of passenger life, and potential liability for the global suspension of Boeing’s 737 model.

All 157 passengers were killed when Ethiopian Airlines flight ET302 crashed shortly after take-off on March 10.

It was the second incident in just five months to involve a Boeing 737 Max 8 plane, following the fatal Lion Air crash in Indonesia last October.

Munich Re has almost a 50% share of London-based aviation insurance pool Global Aerospace, which recently confirmed it was the lead insurer for Boeing, alongside broker Marsh.

Hannover Re could also face exposure of more than €10 million, according to reports from Reuters, who spoke with Torsten Leue, CEO of the reinsurer’s parent company, Talanx AG.

Jeworrek explained that Munich Re would incur losses from its participation in the Global Aerospace Pool and through risks it had underwritten directly, although its claims would be capped by an upper limit in the coverage.

Boeing was pressured into grounding its entire fleet of 737 Max aircraft in the days following the Ethiopian Airlines crash due to concerns that an automated anti-stall system in the model could be responsible both for this incident and the earlier Lion Air crash.

Boeing’s shares fell by over 11% last week and it lost £26 billion of its market value, the biggest hit the company had taken in two decades.