With the fourth-quarter and full-year 2020 results season now complete, COVID-19 loss numbers have, unsurprisingly, continued to trend higher for the majority of carriers.

As noted by PeriStrat, a number of Japanese firms and UK insurer Aviva in Q3, followed by Markel and Tokio Marine in Q4, reported declines in their pandemic loss estimates, although this remained the rare exception.

As shown by the table below, the most notable increase can be seen at Lloyd’s of London, which now takes top spot at almost $5 billion. However, it’s important to note that this figure, as is the case with QBE’s total, includes forward-looking statements regarding further loss trends over the coming quarters.

Readers can view an up-to-date table of all reported re/insurance losses so far here. 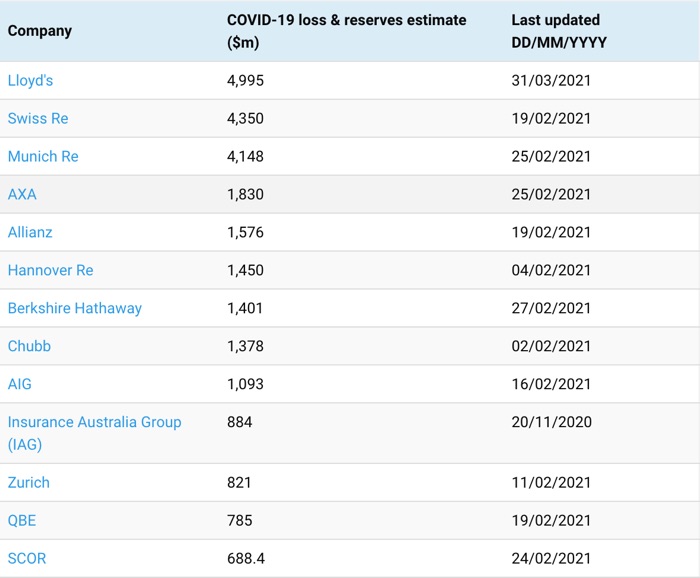 Alongside Lloyd’s, the upward movements mainly came from Legal & General, Fidelis, and Baloise, while Generali and Helvetia reported almost unchanged figures. At the same time, Q4 COVID-19 loss reports remain outstanding for Mobiliar, CCR Re, and Sirius, which suggests the end of Q4 2020 total could be even higher.

As at the end of the Q3 2020 reporting season, PeriStrat pegged COVID-19 losses at $29.5 billion, which means that loss estimates for the pandemic increased by 21%, or $6.3 billion during Q4 reporting.

Clearly, uncertainty still remains surrounding the ultimate industry loss from the COVID-19 pandemic, and potential losses in lines such as D&O and business interruption threaten to extend the tail of the event. Furthermore, the fact the crises is ongoing means that further event cancellation losses are likely.

“The loss event is ongoing and further losses will add to the overall Covid-19 bill. If PeriStrat’s loss estimate of USD50b turns out to be right a potential further USD14b are hanging out for reporting in coming quarters,” says PeriStrat.