Rates continue to increase across commercial lines at Q4: IVANS

Premium renewal rates during the fourth quarter of 2018 continued to increase across almost all commercial lines, according to the latest IVANS Index report.

IVANS, which is a division of Applied Systems, found that premiums increased across almost every major commercial line when compared with Q3, with the exception of Workers’ Compensation, which dropped and remained in negative territory.

General Liability experienced average renewal rate increases of 2.54% over Q4 2018, while Umbrella grew by 2.42% and Workers’ Compensation fell by -3.04%.

“The end of 2018 experienced the greatest change in premium renewal rates from the year prior for nearly all major commercial lines products,” said Brian Wood, Vice President of Data Products Group at IVANS Insurance.

“As we begin 2019, the IVANS Index will continue to provide data-driven insights into the health of the industry, enabling brokerages to give more accurate premium renewal guidance to customers and serving as a valuable reference to insurers when determining pricing strategies,” he continued. 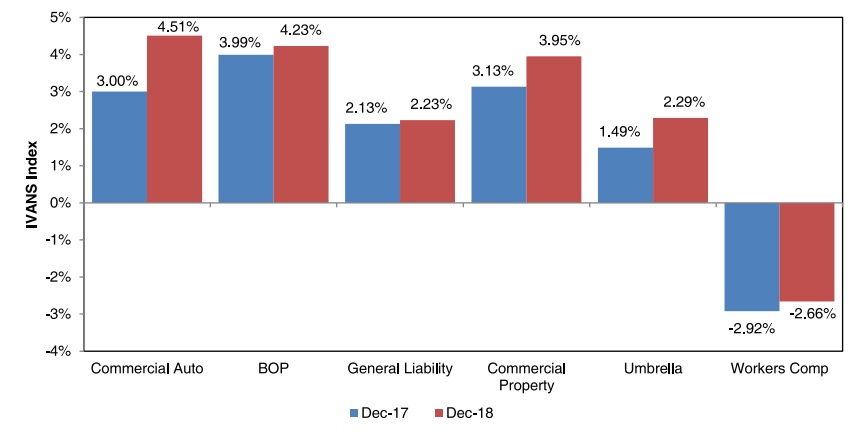 “We expect commercial casualty rate increases to mostly gain steam (some monthly fluctuation is probably inevitable) over the next year in response to inadequate expected underwriting returns,” KBW stated.

In KBW’s view, P&C pricing primarily depends on the level of expected returns for incremental capital providers, which it believes are currently inadequate in commercial casualty lines.