Property Claim Services (PCS), a Verisk Analytics business, estimates that around 33% of the insured losses from the 2019 Chilean riots will come from retailers, and could reach as high as USD 1 billion. 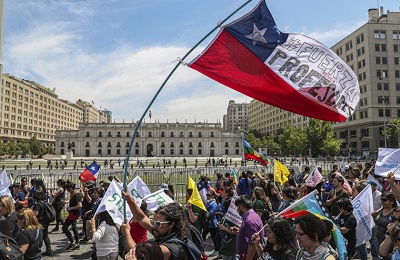 Earlier this week, PCS announced the expansion of its industry loss index coverage to the Latin America region, which follows the launch of PCS Mexico in 2019.

A new report from PCS LatAm reviews the retail landscape of Chile, the major firms hit by the riots and also the insured loss implications from the event.

News reports have said that the Chilean economy is estimated to have taken a USD 3 billion hit following weeks of strikes, marches and damage to property and public transport.

According to the PCS LatAm report, the riots across Chile in 2019 led to somewhat unusual losses for insurers and reinsurers when compared with more typical catastrophe events. PCS notes that man-made insured losses in a metropolitan area, and especially in a developing market, are typically more concentrated by business line, sector, and possibly insurer.

PCS LatAm has released its preliminary estimate for the riots in Chile, revealing that it anticipates that around 33% of the insured loss comes from retailers, a figure that has the potential to rise as loss development becomes clearer. According to PCS, retailer insured losses from the event are estimated to be around USD 900 million, and could actually reach as much as USD 1 billion.

The full report, which is available to all PCS LatAm subscribers, continues to explore the market dynamics for strike, riot, and civil commotion (SRCC) in the LatAm region and the wider world.

Head of PCS, Tom Johansmeyer, commented: “The global reinsurance industry hasn’t seen many man-made SRCC and terror events over the past 30 years that have been significant enough to grab headlines, let alone affect reinsurer risk-transfer thinking. Tianjin, September 11, and Bishopsgate come to mind. Tianjin was a bit different from the other two, neither of which was SRCC.

“It’s a difficult risk to understand, given the paucity of historical information available. That’s why it’s important for reinsurers to invest some extra time and effort into understanding the riots in Chile last year, even if they don’t have much exposure to it. There are lessons here that will matter to them later.”

PCS adds that the first resurvey on the Chilean riots is expected to come 90 days following the launch of the platform.

Alex Mican, Director of Specialty Lines Product Development, PCS, added: “The riots may have affected business in Chile, but in a way, it was a global event. While only one of the retailers with a large insured loss was a global player, the others have significant regional presence, which means that viewing risk on a country basis could result in some blind spots.

“As the loss continues to develop, we’ll remain in close contact with our clients to help them understand how the retail sector is being affected as well as how the overall catastrophe loss evolves.”

Johansmeyer added: “Retailer insured losses have accounted for a disproportionate amount of the catastrophe loss from the riots in Chile last year. While it’s not unusual to see disproportionate large commercial losses from catastrophe events in insurance markets with low personal lines presentation, the sector concentration here is what stands out. Retailers could account for a third to half of the insured loss, with only a handful of companies affected. In a way, this should inform how reinsurers understand catastrophe.

“The notion that catastrophes have a significant number of claims – which is part of our definition in the United States and other regions – doesn’t necessarily mean that a large portion of the loss can’t be concentrated among a few insureds. There are lessons here that could help reinsurers understand risks in other developing markets.”

Specialist re/insurance broker Miller has added motorsport insurance specialist, Tim Nagle to its team in order to support growth in...