The major flooding that occurred in southeast and central Spain last week is likely to drive an insurance and reinsurance industry loss in excess of €287 million (US $318 million), according to analysts at Aon. 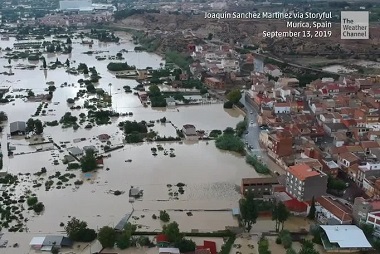 Flooding in Murcia near the south coast of Spain. Source: The Weather Channel/AP

The broker also estimated that insured losses would represent only a fraction of the total economic loss, which is expected to exceed at least €1.66 billion ($1.83 billion).

Parts of Spain were inundated with torrential rainfall between September 11th and 15th, causing catastrophic flash-flooding that burst river banks and swept away cars.

At present count, seven people have been killed and 4,000 evacuated. The worst affected areas are the Valencian Community, Murcia and Andalusia.

The Consorcio de Compensación de Seguros (CCS), the compulsory government catastrophe risk insurance program in Spain, said yesterday that it expects to incur around 30,000 claims following the flooding, representing a loss of at least €203 million ($224 million).

However, these numbers may be revised upwards as the extent of the damage becomes clearer in the coming days and weeks.

This would constitute the highest payout on record for this specific type of weather event, with the highest portion of losses expected in Alicante Province in Valencian Community, and in Murcia.

Total economic losses are expected to be significantly higher due to widespread damage to agriculture and infrastructure, and due to a portion of the property assets being uninsured, Aon added.

Analysts reported that tentative estimates by various agricultural associations put the overall toll in the order of hundreds of millions of euros.

Local government has also estimated aggregated economic losses through all sectors in the  Valencian Community to be €1.5 billion ($1.66 billion), although total losses in other regions have not yet been officially assessed.