Tremor, the programmatic insurance and reinsurance risk transfer marketplace, is excited by its statistics after a successful 2019 and is looking forward to completing quicker, more accurate placements in 2020 and beyond.

In August of 2018, Tremor announced that its open, technology-driven, programmatic reinsurance risk placement marketplace was ready for business, designed to improve the efficiency of matching risk with the right capital.

Later that year, Tremor successful priced and placed a large panel property catastrophe program for a top 20 U.S. P&C insurer, and by September of 2019, had passed $1 billion of total reinsurance quotes, and secured new investment. This was followed by the release of a suite of new features in version 2.0 of Tremor’s marketplace, part of which enables reinsurers using Tremor’s standard quote method to be able to add subjectivities after expressing supply curves and capacity limitations.

As Tremor’s first full year of operations closes, the company has looked back at the performance its marketplace achieved.

“We announced top-line statistics back in December – more than 100 clients signed up on both sides of the market and more than $2 billion in priced capacity. We are proud to have firmly established Tremor as the leading programmatic marketplace for the reinsurance industry in 2019,” said Sean Bourgeois, Tremor’s Chief Executive Officer (CEO).

The firm collects bids over a short, fixed bidding period, which shows the range of capacity that is available at different price points. Subsequently, Tremor’s matching engine finds the best coverage and market clearing prices based on the preferences of the cedant, with final prices and lines announced within just hours of the close of bidding.

The graph below, provided by Tremor, details the experience of cedants who placed their treaties through Tremor and shows that Tremor compresses the duration into a short auction that completes in under five days, as opposed to a traditional placement which can take as long as six weeks. 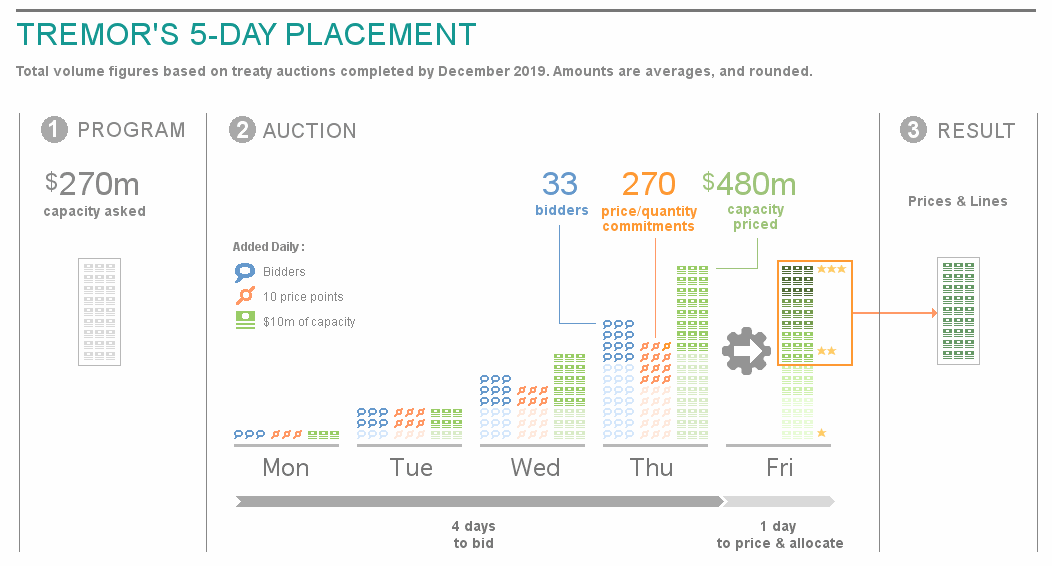 In a typical brokered reinsurance placement, explains Tremor, just a handful of pricing points are collected throughout the quote phase, which are then used to set firm order terms, usually leading to either an oversubscription or an unintended short placement. Tremor aims to address this, and notes that by comparison, on average across all treaties placed, the firm collected over 300 individual price points representing firm commitments from 33 bidders over almost $500 million in capacity.

The company states that any cedant that leveraged its marketplace were guaranteed that they would never overpay as a result of an oversubscription, nor would they miss out coverage because of a short placement. And, for reinsurers, this provides them with an unprecedented level of control over allocations as they were signed lines that the price/quantity pairs in their bids.

“By collecting far more pricing information compared to the typical quote/firm order process used today, Tremor has the capability to programmatically find the right price with the right partners, every time…in a fraction of the time,” said Jeremy Ginter, Tremor’s VP of Sales.

As noted previously, one of the benefits of Tremor is the speed at which it executes pricing and allocation, especially when compared with a traditional placement. On average, all bids are submitted in a short bidding window that, for treaties to date, has averaged less than four days.

After this, the firm’s matching engine runs and final allocations are announced in just hours, and Tremor states that all-in-all, the average time to price and place a treaty on its marketplace was less than five days, after which lines are immediately signed.

“Tremor can execute the price discovery, firm order terms setting, capacity collection and line allocation phases of the transaction within 3-5 days rather than 3-5 weeks freeing up resources that can be redirected to other important functions within the company,” said Ginter.

In analysis late last year, Tremor sought to reveal the extent of price inflation inefficiencies in traditional market placements. Saying that on average, it believes that reinsurers must be inflating prices by at least 5-10% for program placements, with inflation found to be present and substantial across the board. 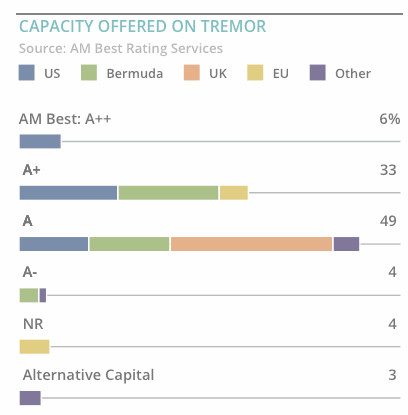 Provided by Tremor, the graph on the right reveals that its programmatic marketplace opens up access on both sides of the market, matching cedants from around the world with global reinsurance capital that is mostly A rated or better, or fully collateralised.

“Here at Tremor these statistics excite us – they show how our programmatic trading platform turns an arduous, imprecise process into a quick and accurate one.

“Tremor opens transactions to the entire market to bring the best capacity to each risk and solicits detailed information about capacity pricing from everyone in order to make oversubscription, short placements, sign downs, and other inefficiencies a thing of the past.

“We look forward to bringing the unprecedented speed and accuracy of Tremor’s programmatic trading to more transactions in 2020 and beyond,” said Bourgeois.