Florida’s Citizens Property Insurance Corporation has announced that owing to “dislocation in the reinsurance markets and significant price increases,” it opted against securing multi-year reinsurance protection and placed a smaller, cost efficient risk transfer program for 2020.

As we wrote previously, Citizen was reportedly out in the market seeking fresh reinsurance coverage from its 2020 reinsurance renewal, comprised of both traditional and catastrophe bond coverage.

Following approval from the Board of Governors, the company sought $1.3 billion of additional coverage, in addition to $400 million of 2018 coverage that remains in place for the current storm season.

However, after a prolonged softened market state, underpinned by consecutive heavy loss years and subsequent loss creep, combined with the impacts of the COVID-19 pandemic, reinsurance rates are trending upwards, which in turn has led Citizens to place a more cost efficient program.

“Based on current dislocation in the reinsurance markets and significant price increases, Citizens decided not to chase the market and not to lock in the currently elevated rates on a multi-year basis”, says the firm, citing rate increases of 15-30% on average, and 50-100% in extreme cases.

As a result, Citizens only placed a risk transfer program of $1.02 billion, which is comprised of $620 million of new placement and $400 million of multi-year protection that remains in-force from 2018.

Combined with coverage provided by the Florida Hurricane Catastrophe Fund (FHCF) of $1.9 billion, the $1.02 billion of private market risk transfer takes the total 2020 risk transfer program to a size of $2.9 billion.

Citizens notes that this was secured at a gross rate-on-line (ROL) of 7.5%, which represents an increase of 7% versus the 2019 risk-adjusted pricing. On a risk-adjusted basis, explains Citizens, the 2020 program cost is 20% higher than the 2019 program based on the gross ROL. 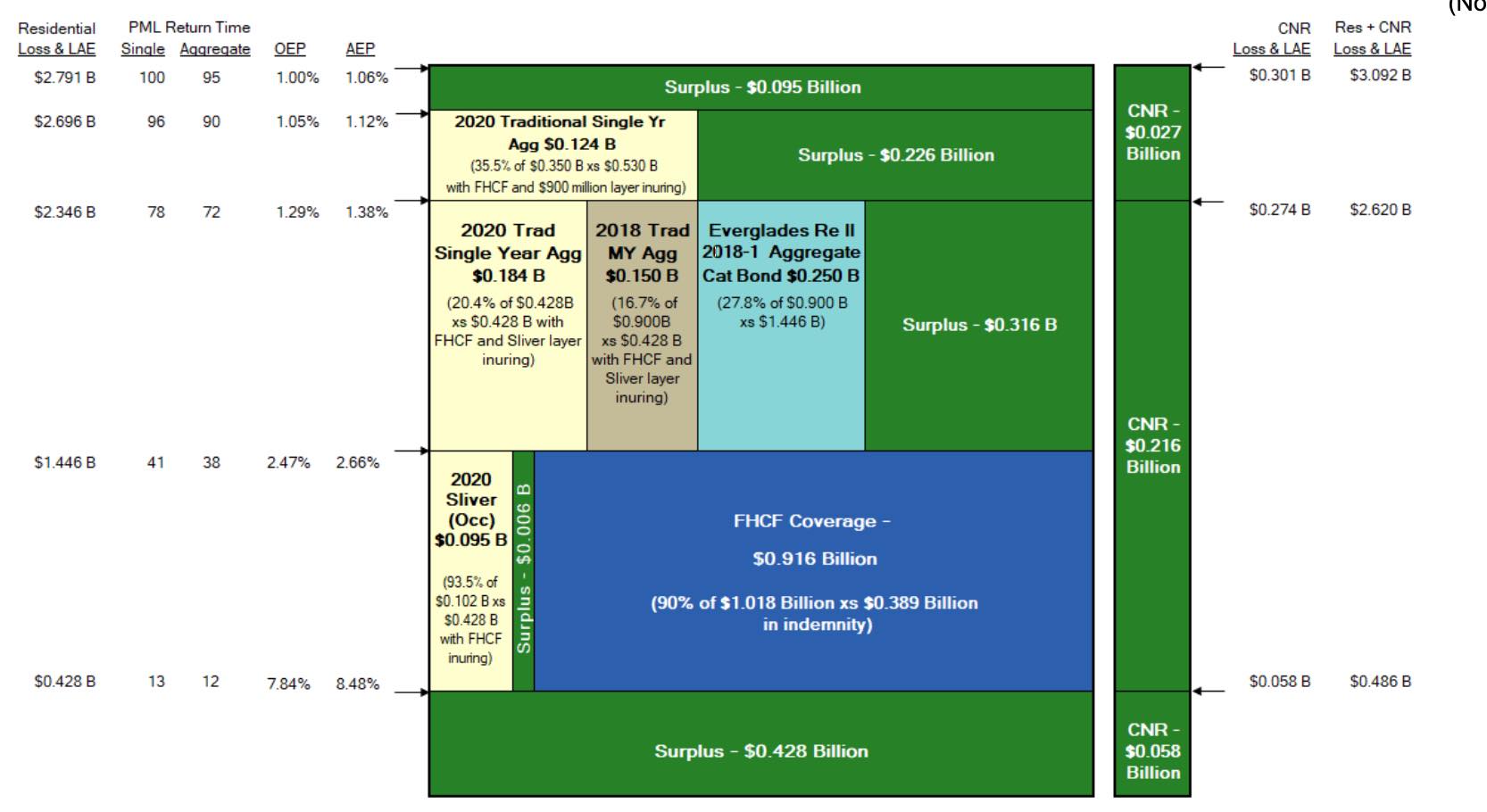 By layer, and Citizens’ risk transfer program for the Coastal Account includes $803 million of coverage with a weighted average gross ROL of 7.76%.

The 2020 risk transfer program for the Personal Lines Account includes $218 million of coverage with a weighted average gross ROL of 10.58%. Layer one, known as the wrap layer, provides roughly $108.1 million of annual, per-occurrence coverage and placed in the traditional market. Layer two sits above this layer and the FHCF, and provides $110 million of multi-year, aggregate coverage in the form of a catastrophe bond transaction, placed in the capital markets.

“The surplus exposed in 2020 is higher than what was exposed in 2019 due to inefficient market conditions and significantly higher pricing. However, we expect reinsurance markets to stabilize as economic conditions and financial markets improve by the end of this year, which will allow us to manage the risk transfer program and surplus exposure effectively and efficiently,” explains Citizens.

Analysts at re/insurance broker Lockton believe that Warranty & Indemnity (W&I) insurance is likely to become more sought after in...