The January reinsurance renewals “broadly defied early expectations of post-loss firming for the second consecutive year,” according to broker JLT Re.

Reinsurers’ desire and ability to underwrite risks remained healthy overall, the broker said this morning, and as a result pricing was seen as broadly stable across reinsurance markets at the key January 1st 2019 renewals.

There were pockets of rate increases, but according to JLT Re these were largely restricted to classes of business where sizeable losses had been suffered, or where the performance of the segment has deteriorated.

While some of the reinsurance market’s excess capital was seen to have been absorbed, by the succession of large losses and other supply demand dynamics, overall the marketplace remains very well capitalised, JLT Re said.

The brokers comments align with those of fellow broker Willis Re, who as we reported earlier today said that renewal rates were largely seen as flat to a little down.

Positively, JLT Re highlights that reinsurer appetite was seen to be dampened somewhat in some of the areas of the market where losses have hit or performance been poor, which is encouraging as it reflects some discipline in a market that at times could be seen as willing to write any risk at any price.

Here the broker highlights casualty reinsurance, saying that in the U.S. casualty market renewals there are some early signs of tightening of rates, as “reinsurers navigated an uptick in loss ratios and an increase in the frequency of severe losses.”

Additionally, the broker highlights that some large risk losses in property and specialty accounts have caused large losses, but that while there was some upward price pressure here the amount of capacity seeking to write these risks offset much of the upward momentum.

The property catastrophe reinsurance market is perhaps where the greatest disappointment will be seen, as rates failed to move significantly.

The broker points out that there wasn’t so much loss affected business up for renewal in this area of the market at January 1st and as a result the broker recorded a -1.2% decline in its Risk-Adjusted Global Property-Catastrophe Reinsurance Rate-on-Line (ROL) Index. 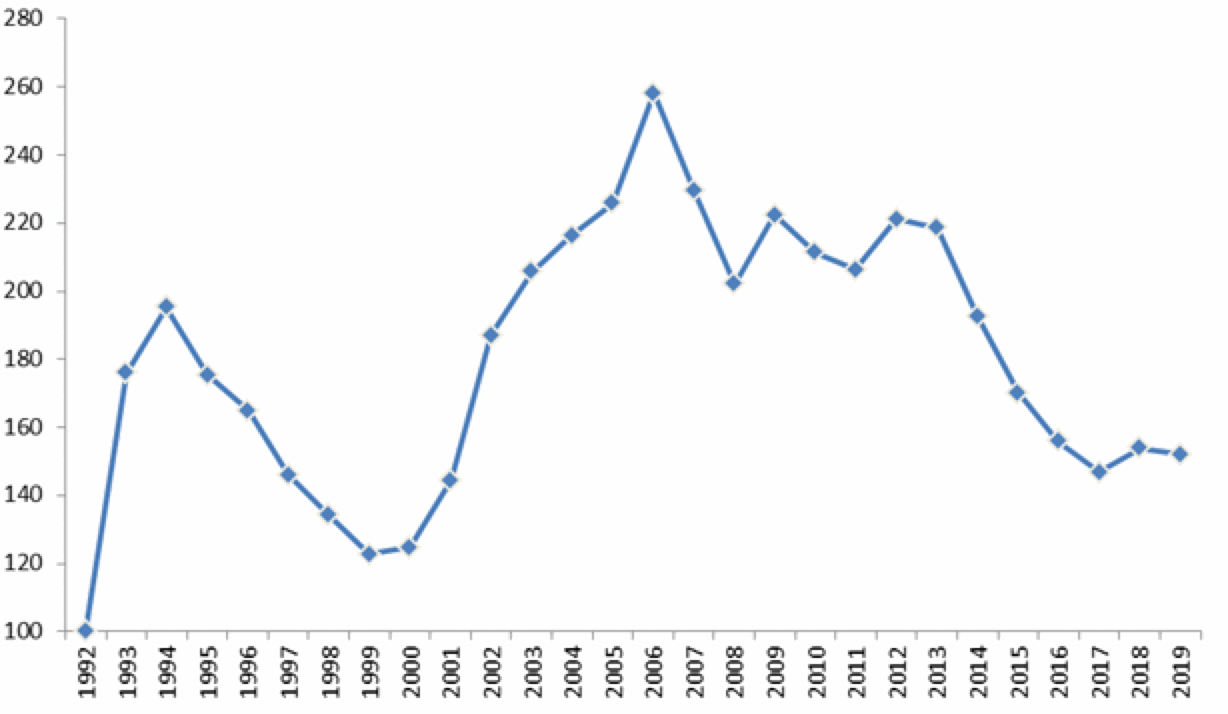 This follows last January’s 4.8% increase though, when again there was not a significant amount of loss affected business up for renewal.

The fact this Index has fallen will disappoint many underwriters that had been hoping for greater market pressure to increase rates and it does not bode all that well for the renewals later in the year.

Ed Hochberg, Chief Executive Officer for JLT Re in North America, commented, “Despite another active catastrophe year in the United States, property-catastrophe rate changes were modest at 1 January 2019. Loss-free layers saw relatively muted movements, typically falling within a range of flat to down 5%. Strongly performing accounts renewed towards the lower end of this range as cedents argued (often successfully) that another clean year merited risk-adjusted decreases in 2019. Loss-impacted layers generally saw price rises, but outcomes varied depending on losses, geographies, exposures and relationships.”

However, JLT Re notes that the picture of overall pricing at the renewal was “more nuanced than in 2018”, as it noted more pronounced differences between the way the market accepted occurrence and aggregate covers and the way traditional and ILS markets behaved.

Bradley Maltese, Deputy CEO of UK & Europe, JLT Re, said, “After another year of significant losses and locked capital in the retrocession market, rates for loss-affected catastrophe layers were generally up by between 10% and 20% on a risk-adjusted basis, with aggregate covers falling towards the upper end of this range. Many clean occurrence retrocession programmes were renewed flat to up 10%. Global and Lloyd’s direct and facultative (D&F) catastrophe covers were less affected by 2018 losses and, after strong increases at last year’s 1 January renewal, rate changes in 2019 were typically down 2.5% to down 7.5% on a risk-adjusted basis.”

The Asia Pacific property catastrophe reinsurance market was largely seen as down, as the renewing territories largely experienced benign loss activity and Japan generally renews in April, JLT Re said.

In Europe, another quiet loss year resulted in most reinsurance programs renewing flat to slightly down, the broker explained.

In global casualty reinsurance business, loss-free programmes renewed at levels near to where they expired, while some moderate increases were seen across loss-affected accounts, but this was often accompanied by lower ceding commissions, particularly on the loss-affected programmes.

“Most programmes were broadly flat or slightly reduced in cash terms, which generally led to risk-adjusted outcomes ranging from flat to down double-digits,” JLT Re said.

David Flandro, Global Head of Analytics, JLT Re, commented on the reinsurance market at the renewal, saying that once again capital drove dynamics, “Sustained capital inflows have offset mounting pricing pressures to bring relative stability to the reinsurance market over the last several years. Record levels of dedicated sector capital at year-end 2018 once again helped ensure continued, plentiful capacity across most lines at 1 January 2019.

“A small portion of excess sector capital was nevertheless absorbed in 2018 by sizeable insured catastrophe losses in the second half of year, a reduction in third-party deployable capital, higher demand for reinsurance and a renewed focus on underwriting discipline, as shown, for example, by reduced stamp capacity and higher capital requirements at Lloyd’s.”

Reinsurance rates flat to slightly down at January 2019 renewal

Reinsurance rates at the key January renewal season are largely seen to have been flat or a little down, according...